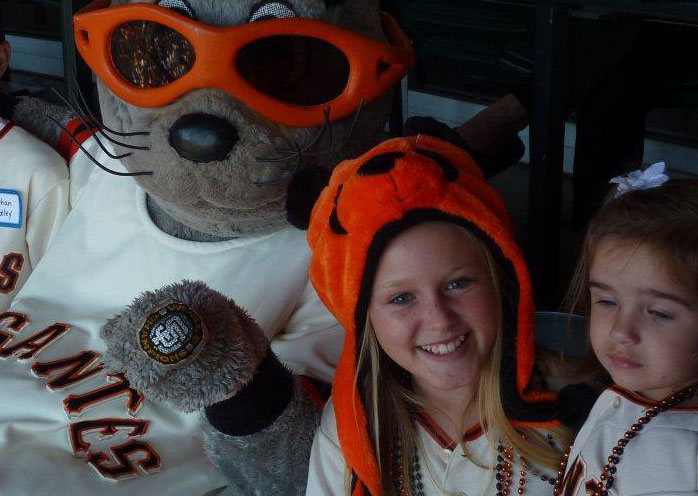 Jessi’s wish was to meet the princesses at Disney World and to attend a Giants game at AT&T Park! Jessi is a 11 year old young lady with a chronically debilitating medical condition who loves gymnastics and cheerleading. She also loves Disney Princesses and the San Francisco Giants! Jessi was completely surprised by the Wish Team when they welcomed her at the Embassy Suites for her weekend in San Francisco, and then was whisked away in a limo to enjoy watching the Giants play from the vantage point of the AT&T Suite in AT&T Park. She was speechless when her limo arrived at AT&T Park where over 80 AT&T employees and their families were there to greet and cheer for her when she walked up to the stadium.

After the big game, Jessi’s stretch limo arrived to whisk her back to the hotel where she had an absolutely fantastic time at her Princess-themed Party! Jessi received many special gifts (as did her brother and twin sisters), including a custom hand-made quilt with her favorite colors and themes (Disney Princesses, gymnastics, and cheerleading). She and her brother also received the latest Go-Phones, compliments of our AT&T Consumer Sales organization!

The following morning, the Wish Team arranged for Jessi and her family to be taken by limo to the airport where they boarded a plane and flew to Orlando. They were met by the Orlando AT&T Pioneers who helped them with their luggage as they met up with yet another limo that drove them straight to the newest Disney Vacation Club Resort – Bay Lake Towers – overlooking the Magic Kingdom. They enjoyed an amazing Disney adventure for five nights!